The “fashion show” as we know it today is a heavily mythologized institution with a reputation for being exclusive, grandiose, and expensive (it’s no wonder they’ve taken off in St. Andrews..!). Modern fashion shows are formal events, either ticketed or invite-only, with different seating areas for stylists, critics, photographers, etc. However, the fashion show has undergone many permutations and served many functions in its relatively brief history before it arrived at this current form. Here we will track its development through time and examine a few turning points in its evolution.

The advent of the fashion show is attributed to designer Charles Frederick Worth who, in the 1860s, had the idea to present his designs on people instead of mannequins (apparently this was innovative at the time). What followed were several “fashion parades” in major Western metropoles: London, Paris, New York. These were still much less formal than the fashion show’s current implementation — Worth’s took place at a racecourse. 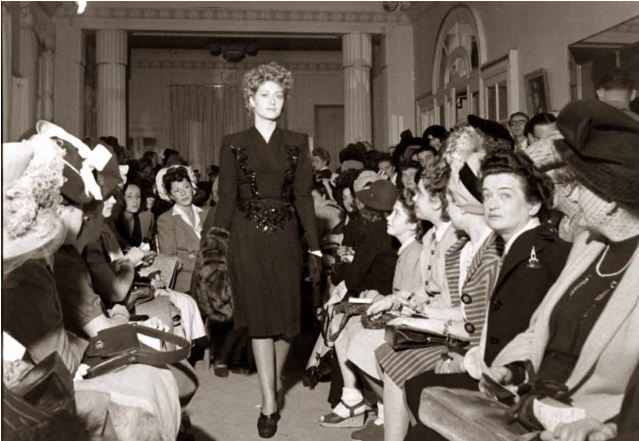 Polio vaccines, telephones, and, most importantly, the golden age of “haute couture.” Big names (and sometimes Nazis) like Coco Chanel and Christian Dior were actually alive, and they needed to show off their work. The shows or “salons” were still intimate affairs, and photographers were banned for fear they were of sartorial spies sent to steal designs. It was custom for many of these salons to finish with a wedding dress.

This all changed with World War Two. The first New York Fashion Week took place in 1943, and Dior’s first formal fashion show, closer to those we know today, took place in 1947. The 1950s brought a series of Italian fashion shows, and the decline of couture in favor of ready-to-wear gave way to the increasingly publicized events of the 1960s. Photographers’ access to these events was still restricted throughout the 1960s, as old suspicions persisted.

In the 1970s, the revolutionary Yves Saint Laurent was established, couture was firmly a thing of the past, runway shows had emerged an established themselves, and Paris Fashion Week was founded. If the few decades prior had been about establishing the conventions of the fashion show, the 1980s onward were all about breaking them. Designers began emerging on a more global, less Eurocentric scale. There is perhaps no one as (in)famous for producing outrageous events within this period than Alexander McQueen, who created pieces from random bits of plastic and used real fire as decoration. Theatricality became a major component of the fashion show, and lines between artwork and actual clothing were dissolving.

The heyday of the televised, celebrity-laden Victoria’s Secret Fashion Show has come and gone. Most major fashion houses bear the names of late designers, and brand-new groundbreaking names have been slow to emerge. Sustainability and body diversity have entered the conversation. The future not only of the fashion show but of fashion itself is uncertain — what is to come next? It’s a cliched truism, but only time will tell.

There was an error retrieving images from Instagram. An attempt will be remade in a few minutes.